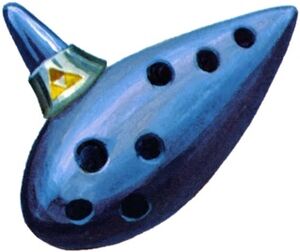 As Alexia spends days roaming through the forest that the portal dropped her off at, she comes across some very strong imps. Now her magic wasn't strong, as it probably should have been, and the imps beat her so bad that she couldn't move. Before they finished her off, a strange old man appeared out of nowhere and smashed one of the imps right in the face with a golden mace and scattered the rest. Afterward he gingerly gathered the broken Hylian up in his arms and carried her out of the area.

Alexia was too weak to resist, and eventually passed out. Where the Ocarina was, or where they were going were unknowns. As was why she was never seen again.