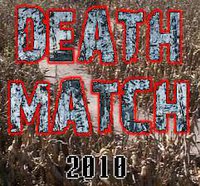 Fighters have an exotic weapon which deals 10d7 (average 40) slashing damage per round. They are also equipped with a piece of armor that provides 100 armor score and a shield which provides 25 armor score, for a total of -25 armor score (95% damage, 123% without the shield). 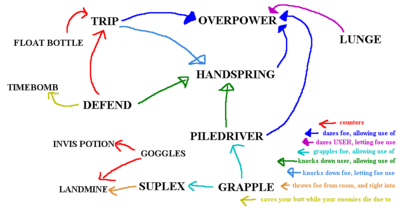 Fighters have the following skills, all at 100%:

Note that one combat round is equal to 16 beats of lag.

Syntax - trip (target)
Trip attempts to knock the opponent off his feet, dealing minor damage but knocking the opponent to the ground and dazing him momentarily. It can be used either during combat or to initiate combat.

Syntax - overpower (target)
The Overpower skill is an opportunistic assault which works best on a Dazed opponent. It does awful damage and has poor speed during normal combat, but when used many times rapidly on a Dazed foe, it can generate a lot of damage. This skill will not work on an opponent who is not Dazed and using this skill on a non-dazed opponent will incur lag.

Syntax - defend
This skill takes the user into a defensive posture for one to two combat rounds. While in a defensive posture, the user takes 25% damage from all attacks but cannot initiate attacks of his own. Additionally, the user's status counts as 'sitting' for the duration of the skill, conveying all modifiers that sitting normally would in combat.

Syntax - grapple
By using the grapple skill, the player attempts to lock down his opponent with a wrestling move. While grappling, automatic combat is disabled for both the player and his target. Both characters can still attempt special skills, although damage dealt by the player to the target will break the grapple hold.
The suplex and piledriver moves can only be used on a grappled opponent.

Syntax - suplex (direction)
Using suplex, the player lifts his opponent and attempts to chuck him into an adjoining room, dealing damage. If no appropriate exit exists, the opponent will collide with a wall instead. Suplexed opponents may collide with other characters when they land. Suplex can only be used on a grappled opponent.

The arena is laid out on a grid of 25 rooms and is radially symmetrical:

When a match begins, each exit from the staging ground leads to one corner or edge of the arena. If you fail to enter the arena quickly enough after the match begins, you will be placed in the center.

A cannon in each corner will instantly blast you to the opposite corner at a cost of 50hp, but cannot be used while fighting. To use a cannon, type activate cannon or just 'act can'.

Each fighter starts with 6 gold coins, and most items cost 1 gold. Items can be spawned randomly during the match, but you can't loot unused items from another player when you beat them (because corpses aren't created in arenas).

a land mine
Syntax: hold mine, use mine
Details: Usable once, creates an invisible land mine in the room that deals 250-275 damage to the next person that walks into the room. You can trigger your own mine, so be careful! Requires an empty hand.

a time bomb
Syntax: hold bomb, use bomb
Details: Usable once, creates a time bomb in the room that deals 325-350 damage to everyone in the room when it explodes. The timer is 8 to 12 seconds, and it will also damage the person that put it down, so be careful! Requires an empty hand.

a healing potion
Syntax: drink healing
Details: Restores 25% of your maximum HP. Will not overheal. Healing potions cost twice as much as other items.

an invisibility potion
Syntax: drink invisibility
Details: Makes you invisible for about 90 seconds. You will become visible again if you attack anyone, though!

a float bottle
Syntax: drink float
Details: When consumed, you will float above the ground for about two minutes. While floating, you are immune to the 'trip' skill and take no damage when landing after using an arena cannon.