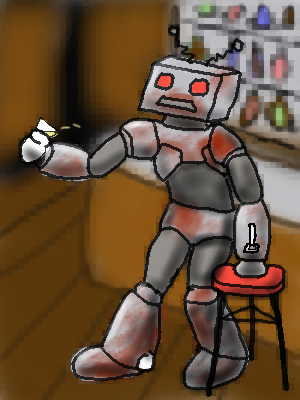 Well, fancy be. I was hanging out by the fountian this mornin' when I heard a couple of fellas raising hell up by Moti's place. Something about an axe. When I wandered on over, there was this scraggly lookin' bot just shy of throwing a fit, going on about wanting an axe to liberate some tree stumps from, get this, the rest of the tree. Apparentally the log was oppressing the tree stump.

So, I get to talking to him, and get this. He says that he has spoken to god, and after a few rounds of booze, god told him of the plight of these tree stumps around utopia, a place of infinite beer. So: he had it in his mind to set about solving this.

Anyways, seeing as how none of us had a spare axe, me and this other guy took the poor guy up to the nearby waterfall, which has a bunch of ornery goblins with wicked little axes. That proved to be what the guy needed. Afterwards, he took me over to this cliff and showed me where the utopia was. Then, apparentally misunderstanding the concept of gravity and perception: the little guy up and jumps off the cliff!

Well, I rush down there to make sure the little guy is doing well, and after finding out everything is basically working okay for him, he shows me this 'utopia' of his up close. Some little fountian out in the forest that pumps out nectar that'll nip you up right quick. Anyways, we're getting ready to chop us up a bunch a trees when this little cactus fella comes bumbling out of the treeline!

He tells us that we can't hardly cut down the trees, something about them being his relatives or whatnot, and after a bit of yakkin we find out he's some kinda priest. That sets off the little guy who immediately is enamored with our new cactus buddy. Insists he becomes a priest of the, what was it, "One true faith"? Anyways, he offers us up some booze and I figure, 'What the hell' and drink up. Our new plant-pal drinks up too, and then guy names him the deacon of the faith. And me the pope!

They dug around for a little bit for details on the religion, like what the name is. So I offered the idea of 'Alcoholism'. That worked fine with robot-guy, and that was that. The plant guy told us his name, 'Ghostfish'. Odd stuff. I tell them my name and then Robo-guy tries to figure out his. 'Drunkman' or something. Seems to fit him. Anyways, got some trees to chop down, I'll pick this log back up later.