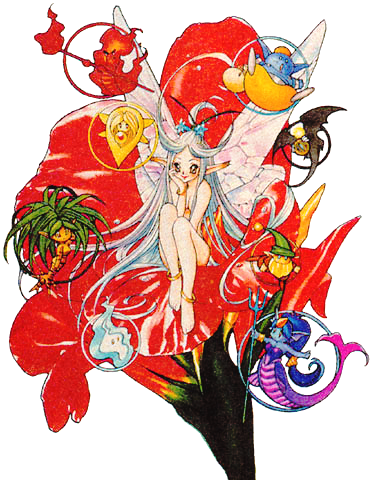 Characters in the Cleft of Dimensions all have an innate element, or elemental alignment, that determines some weaknesses and resistances to damage types. A character's innate also affects spells, especially for Wizards.

Players get to choose their Innate during character creation. A character's innate can't be changed later! The selection of innates coincides with the Days of the Week as well as most of the Mana Spirits (except Shade and Lumina).

The weaknesses and vulnerabilities granted by choosing an innate are permanent and can't be removed. Weaknesses can be canceled out to normal damage by having resistance, and Immunity will ignore the weakness completely.

Mobiles, NPCs, and Monsters may have their innate set by their area's builder. Their innate can also be assigned at random when they are spawned, but a mobile with a random innate will never end up with no innate.

The Wizard class changes the most with the character's innate:

Objects can have an Innate as well, from the same selection as players or mobiles. If a player or mobile with an innate besides 'none' equips an armor object with a matching innate, there is a bonus to the amount of AC granted. If the item opposes the wearer's innate, there is a small penalty.

This is the only concrete interaction that objects' innate has with anything. An item's innate also affects the message (and only the message) when some item types decay.

The object innate feature may be either expanded on or removed entirely in the future.