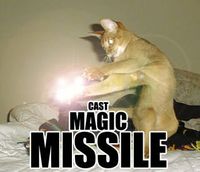 With training and practice, this could be YOU!!

Technically, Spells are just Skills that don't have their own functions; they are all used by typing 'cast' followed by the name of the spell. This gives all spells some common properties.

Remember that you can always type help <spell name> in the game itself to get skill info.

The base chance of a spell succeeding is slightly greater than the player's skill% in that spell. If a spell fails to cast, the player receives the 'lost your concentration' message and only 1/3 of the normal mana cost is used. There is always a 2% chance of spell failure, however.

Attempting to cast a spell causes a set amount of lag to the player, depending on the spell used.

When a monster casts a spell, it goes through a different but similar function; most notably, mob spells don't consume mana, don't cause lag, and ignore cooldown.

Because of their common activation requirements, Spells can also be used via items like potions and wands. This differentiates them from skills.

There are several flags that can affect the way spells get cast. Unless otherwise noted, all these affects apply when mobs cast spells as well.