Born to unknown parents in the Land of Ooo, Finn is considered one of the last properly functioning Humans where he's from, a rarity after The Great Mushroom War. Taken in by Jake's parents and raised alongside him, Finn grew into a fine young man with a strong moral code and an abundance of strength and agility. Naturally, he took to adventure, proceeding to build good relations with the Candy Kingdom and a number of other denizens of the land.

Finn has been a number of things in his lifetime: mage, king, dimension hopper, amongst other things. But his real designation is 'Hero', as he's not afraid to jump into battle for friend and innocent alike. He's also well-known for helping anyone who's in trouble.

Finn's arrival in the Cleft was quite sudden, with a portal opening and the call of adventure wafting from from it. Heeding that call, Finn leapt in with Jake, but was immediately separated from him, landing in Truce, while his buddy landed in Viorar. Assuming that Jake was off to places unknown, Finn managed to track down the correct seeds and fertilizer to make his own Tree Fort, hollowing it out and furnishing it with his own two hands, making it relatively close to how it used to be back home. A few extra rooms were added, and the bedroom expanded.

Aqua Blade / Polar Blade: Utilizing Undine's favor, Aqua Blade creates a gushing torrent that wraps around Finn's sword, allowing him to do bludgeoning and water damage. The flow of the water can be slowed and increased as required, and the water is seemingly purified and fit to drink, which makes it great for filling canteens, or just for a quick drink. Polar Blade creates sharp shards of ice around his blade, dealing piercing and ice damage upon successful attacks. These shards of ice can, with a sufficiently strong enough swing, detach from the blade and cruise through the air as crude, makeshift projectiles.

Tectonic Blade / Geode Blade: Utilizing Gnome's favor, Tectonic Blade covers Finn's blade with thick, heavy rocks. This increases the weight of the weapon, making it an excellent bludgeoning weapon. In rocky areas, more rocks can be added to the blade to make it even heavier and even more effective. How Finn will manage to lift such weight is up to question. In addition, Tectonic Blade seems to tap into the Earth when swung into contact with the ground, causing localized tremors that can knock all but the most balanced of warriors off of their feet! Geode Blade entraps the sword with jagged crystal. While not unlike Polar Blade, where it lacks a functional projectile, it makes up for it by dealing potentially massive damage to organic targets, both physical, and of the earthen variety. Because of the hardness of the gems, they also do quite well against metal, too.

Gust Blade / Jet Blade: Utilizing Sylph's favor, Gust Blade shrouds the sword with a fierce wind. When first activated, it creates an amazing burst of wind energy, which can be used functionally as a second jump to avoid projectiles. Gust Blade also has a tendency to, when thrust upon the ground, make dust devils. While dust devils aren't particularly dangerous at speeds of around forty-five miles per hour, they can be extremely difficult to avoid and can put off weaker warriors. Gust Blade is considerably more effective in places where the air is already moving. Breezes, however, don't do much for its effectiveness. Theoretically, in gales or greater weather phenomenon, Gust Blade could summon real tornadoes, with all the real, tragic danger that entails. Finn seems to be able to exert MINOR control of these dust devils and tornadoes, but on a very basic level at best. As for Jet Blade, it generates a fiercely neon-green tornadic aura around the blade's edges, enhancing its general cutting power and dealing high amounts of wind damage. It's not particularly effective against metal targets.

Vine Blade / Floral Blade: Utilizing Dryad's favor, Vine Blade wraps his sword in vines. While not particularly effective, the vines can be used to greatly enhance his reach. The vines are strong, not easily cut without considerable power, and can hold a lot of weight. As a result, it's a more effective blessing for utility, allowing Finn to build bridges, hammocks, and other useful things with the vines. It also allows him some mild degree of control on native vines, but short of kudzu, chances are good that any exertion of control on the vines won't manifest 'til days later. Floral Blade causes the blade to gradually grow cherry blossoms. These cherry blossoms are easily removed from the sword by even weak sword swings, and as a result, they go flying toward their targets as small, but functional, projectiles. The blossoms seem to be razor sharp and deal slashing damage. However, besides that, Floral Blade seems to do little extra in the way of enhancing sword strikes, and is considered more situational than anything else. However, because the cherry blossoms don't go away, someone clever like Finn can typically find a way to utilize them long after they've hit the ground.

Lunar Blade / Moonbeam Blade: Utilizing Luna's favor, Finn imbues his sword with moon energy, which wraps his sword in illusions, forcing those around him to perceive his current blade (or other weapon) as being smaller, larger, wider or thinner than it actually is, making parries and ripostes more difficult. Moonbeam Blade is a little more simpler: it allows Finn a reliable light in dark places. Both swords deal 'moon damage' by randomly choosing another blessing Finn's already acquired and deals extra, albeit light, elemental damage of that type, but only one element per successful attack.

Shadow Blade / Twilight Blade: Utilizing Shade's favor, Finn imbues his sword with darkness and shadows. Shadow Blade enshrouds his blade in darkness, which, with every swing of the sword, summons a curtain-like darkness that not even light can pierce. Only Holy or Light energy can disperse the shadow, and it's not just good for getting shade on a sunny day. It can also be used to obscure Finn's movements from an opponent. Twilight Blade, however, works in tandem with Shadow Blade: it can absorb the shadow (or any shadow, for that matter), storing the dark energy up for bursts of shadowy projectiles that deal Dark damage. Because of the nature of the Demon Blade, these enhancements are particularly more effective when used in conjunction with it, increasing the dark/shadow damage that these blades deliver upon successful strikes.

Flame Blade / Magma Blade: Utilizing Salamando's favor, Finn imbues his sword with fire. While both are also an excellent source of light, both blades are dangerous to use. Flame Blade is a straight-forward shroud of flame around his blade, that also deals fire damage, which is effective if only for its simplicity. As a result of the flames, Finn has to keep the blade further away, as it's quite hot. Magma Blade is similarly simple, but flows his sword in magma. If the sword cannot handle the immense temperatures that the magma is kept at, it can melt.. so typically, Finn only uses it with the Demon Sword, which can handle the immense heat. Naturally, these blades can inflict some nasty burns when it comes into contact with anything.

Backpack: Finn's backpack is a traditional backpack, capable of holding a number of things. Normally, the backpack is filled with essentials: food, water, rope and light sources. Other times, it's left empty to harbor travelers like Jake, or to be filled with other things, like treasure.

The Demon Sword: This blade was originally owned by Jake and Finn's father, but was eventually discovered by Finn and acquired for his use. It's a longsword made entirely of demon's blood. Despite it being made of demon's blood, it's razor sharp and extremely light. The blade itself is almost completely a blood red color, with the handguard reminescent of an ornate Celtic cross, while the pommel curls outward, not unlike a demon's claw. The hilt is wrapped in fine leather, and is clearly well taken care of as the only non-demonic-related thing about the blade. Because of the demonic nature of the blade, it does well against almost anything, and receives the Mana Spirit's blessings quite well. The blade, however, has a naturally hard time deflecting, blocking or reflecting Light and Holy-based attacks, but excels against darn near everything else.

Recently, the Demon Sword has proved invaluable in easily channeling the Mana Spirit's elemental blessings. While Finn has recently managed to channel the elements during fisticuffs, or with kicks, he's still learning how best to utilize them in a new manner, and it's slow going at best.

Horseshoe Necklace: Kept around Finn's neck is a simple metal necklace, a relic dug up from the Land of Ooo and brought to the Cleft. It used to be rusty, but has since been magically cleaned up. The horseshoe on it glows a gentle golden yellow, though it's not made of gold (it's actually made of cheap scrap metal). What the necklace actually does is a closely-guarded secret of Finn's.

The Tree Fort: This Tree Fort was planted and grown not far outside of Truce, easily a landmark for travelers to use to know they're close to Truce. The Tree Fort is much larger than the one back home in Ooo, as it contains a few extra rooms, but is functionally similar. The major differences are that it now holds a library and a dedicated treasure room built into a 'basement' underneath the tree proper. The bedroom has been expanded to give more room, and where an M used to be etched into the bark in the living room, an F has been etched instead. 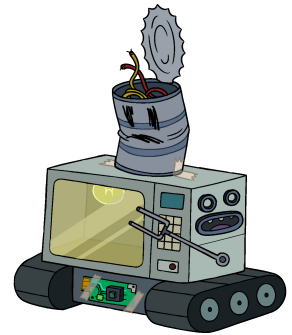 NEPTR: Another recent arrival into the Cleft, NEPTR stands for Never Ending Pie Throwing Robot. NEPTR has been tasked with tidying up the treasure room and keeping stock of all artifacts, treasures, gold and silver stocked in the treasure room. It's also gotten updated functionality, with a few new combat modes. Ultimately, NEPTR isn't a particularly powerful robot, but is capable of throwing boiling hot pies with surprising aim, and true to its name, it will splat intruders until dismantled or deactivated, or they've moved out of range. NEPTR has also been known to help Finn on adventures now and then, and has even built functioning mech suits for Finn and Jake with just scrap.