52 - Construction of the Spirit Temple begins under orders by Iktoa'ako'ya. The building process is slow and takes many years, as the temple is not a high priority and Iktoa'ako'ya wants to make sure everything is made right.

160 - Construction of Spirit Temple is complete.

200 - Iktoa'ako'ya dies and during a special ceremony her body is placed in a tomb hidden somewhere in the Spirit Temple. Everyone who knows where her tomb is is ritually killed by the Sheikah. 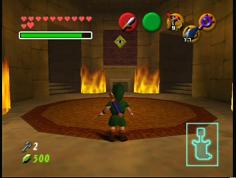 If you see a boy in green in a lot of these pictures pretend he isn't there.

The Spirit Temple was erected in honor of those that did not survive the transplant into the Cleft of Dimensions. Many people annually made trips to the temple to pay homage to their ancestors, but the frequency of these trips diminished significantly after the Haunted Wasteland formed and the Iktoa kingdom crumbled.

The Exterior of the Spirit Temple is in the form of a large seated figure commonly known today as the Goddess of the Sand, though when the temple was first built there was no sand anywhere nearby. Inside, the same figure exists as a large statue in the main prayer hall.

The resting place of Iktoa'ako'ya. All participants in the ceremony placing her body in the place voluntarily were ritually killed by the Sheikah, supposedly. Iktoa'ako'ya said she wanted to be laid to rest at the exact spot where she saw the Origin Wormhole close up in the sky during the early years of the Cleft.

A special fountain was erected near the temple, though it can no longer be found anywhere. It was dedicated to the fairies that used to inhabit the rich regions of Iktoa, but eventually died off when the wastelands formed.

To get to the Spirit Temple one must travel through the Haunted Wastelands. The temple is located in the Colossus Valley somewhere in the southwestern region of the wastelands.

Since the wastelands became prominent, many spirits have appropriately found a home in this temple. However, many of these spirits are very bitter and aggressive, making the temple quite dangerous to be alone in.

What was once the nation of Iktoa, now just the Gerudo, oversee the Spirit Temple. Soldiers are routinely sent into the temple to purge the evil spirits from its walls.

A human male wearing a high-crowned fedora and wielding a brown whip once delved into the temple's walls while weary of snakes, his goals were clear:

"An explorer is always prepared to face danger. The Gerudo are warriors by nature, so their secrets are rarely protected without guardians. With enough patience, even their secrets can be revealed. Be sure to bring plenty-a food and water and something to rest in, it can be-a long trip!"