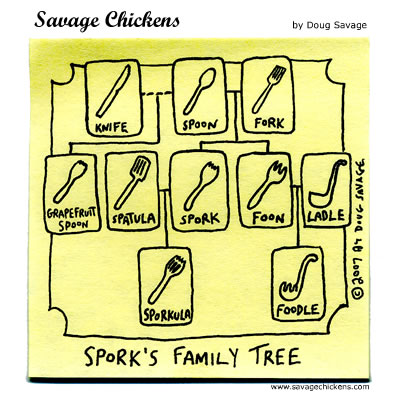 Utensil Wars is a Real-Time Strategy game coded into the MUD itself using only Mobprogs. It was made by MTS a couple years ago and can be played in the Battle Arena area (You can buy a ferry ticket there in Truce).

Players construct buildings and train units, and order their troops across the landscape to attack their opponent.

When two players enter the Utensil Wars arena, each one picks up either the Gauntlet of the Spork or the Gauntlet of the Foon, choosing their team. Other players can be present to watch the battle, but units of each army only respond to the commands of the player wearing the appropriate gauntlet. The gauntlets are automatically removed when the game is over.

Players command their units verbally with the say or tell commands. All units respond to "help", which displays a list of available commands for that unit or building, and to "report", which displays the unit's current health and (on some buildings) mana.

Each player starts with one, and you win by destroying the opponents'. Headquarters are used to train engineers (for 20 hq mana), which are necessary to expand. Starts out as a tent, but can be upgraded to a lodge and upgraded again to a fort. Each upgrade grants a full restore of HP and MP, and some upgrades open new build options. You need at least a lodge to build an archive/library.

Are built by engineers (for 50 hq mana) and used to train all other units in the game. Barracks each have separate mana supplies, so the more you have, the faster you can assemble your army.

Are built by engineers (for 30 hq mana). Launchers and tossers are combat structures, which are cheaper and sturdier than ordinary units, but can't move from where they're built. They usually serve a defensive role (but see engineer rush below).

Launchers and tossers have 35 HP.

Are built by engineers (for 40 hq mana), provided your headquarters is at least a lodge. These do nothing on their own, but simply having one bestows new training options on all barracks on your side. There is no advantage to having more than one archive or library.

Archives and libraries have 40 HP.

Are trained by headquarters (for 20 hq mana) and used to construct all other buildings in the game. They use the headquarters' mana to do so.

Engineers have 20 HP, but are weak as combat units.

Are trained by barracks (for 30 barrack mana).

These are the basic combat unit. They have 25 HP.

Are trained by barracks (for 30 barrack mana), provided you have an archive or library. Spillers/splashers are slightly weaker than footmen/soldiers, but hit four enemies at a time.

These are area attack units. They have 20 HP.

Normally commands are given to the game's buildings and units through "say" or "osay", but less obvious is that it's possible to give commands to individual units using "tell". This is useful when you have two engineers and want to build only a single archive/library, or if you want to launch an attack with only part of your army.

Engineer rush is an early-game quick-win strategy where you take the first engineer you produce and immediately move it into the enemy's headquarters square before the enemy has any defenses, then tell it to build a launcher/tosser on the enemy's turf. The engineer itself is fragile and easily killed, but if it can complete building launcher/tosser in peace, then the launcher/tosser can easily crush the opposition.

Engineer rush can be defended against simply by building a single defensive launcher/tosser at the first opportunity. Since it's so easy to defend against, it's a pretty ineffective tactic except against newbies, but most people have fallen for it at least once.

Only moderaters should enter data here. Also enter the day on which the the match occured.