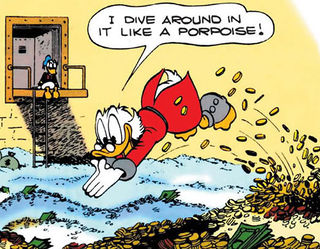 Due to a combination of international agreement and happy coincidence, most currency in the Cleft of Dimensions is identical in size, composition, and weight. Prices of items are generally consistent across the whole planet; an apple is worth about 30 silver on every continent.

While they may have been minted in different places at different time, nearly all coins fall into one of the following denominations:

The Money object type can exist on the ground and also briefly when money is given to a mob or player.

When a player or mob 'drop's gold or silver, a Money object is created on the ground with appropriate item values and weight. Since you can't drop gold and silver simultaneously, one of the values will always be zero.

Once a player or mob 'get's the money item, it gets abstracted into their gold and silver counts and ceases to exist as a distinct object.

Builders can create money objects with a mixture of gold and silver, and with oddball weights or names. If a player tries to 'get' a pile of 50000 gold and 50000 silver that weighs 0 pounds, they will in fact pick it up successfully.

Every player has a global bank account which they can deposit gold and silver into. It's extremely convenient that every single bank in the Cleft is in cahoots.

The Priest class can 'sacrifice' piles of money on the ground to recover mana at a rate of 1 gold/100 silver per 2 MP restored.

Other classes that sacrifice money will simply destroy it with no other affect.

When a player 'give's gold or silver to a mobile, the money briefly turns into an object. This allows a mobprog with the GIVE or BRIBE triggers to examine it, determine its value, and act accordingly.

This sample mobprog, on a 'GIVE all' trigger, will cause the mob to keep anything over 3 gold or 300 silver, give back any less, and ignore any other objects.

In the case of mobprogs with BRIBE triggers, the trigger will only run the prog if the item is money, and its value, in silver, is equal to or greater the trigger's argument. In the unusual case of money objects that contain both silver (v0) and gold (v1), only the silver amount will matter!