From The Cleft of Dimensions Wiki
(Redirected from Mana Spirits)
Jump to: navigation, search 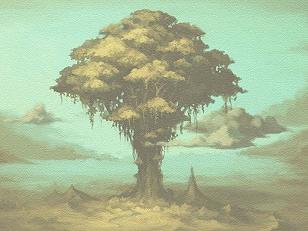 The Mana Holyland is a place in the Upper Realm that contains the Mana Tree and a population of fairies and other Mana creatures.

The Mana Tree itself goes through a cycle of death and renewal and is tended by a group living in the Mana Holyland called the Mana Tribe. These people, all hail from a bloodline that is closely tied to the Goddess and Tree. When the Mana Tree dies, one of the Tribes women is selected to become the Tree anew. The males of the Tribe have the unique ability to wield the Sword of Mana, without the need of a destiny, great evil, or being blessed by the Mana Spirits.

There are eight mana spirits, one for each facet of the power of Mana. They are tied directly to the Mana Goddess, although they all possess their own free will. 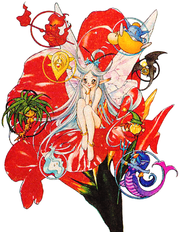 All eight Mana Spirits, and a fairy

All Mana Spirits except Lumina and Shade have a day of the week named after them, and have a player-selectable innate element associated with them.

The Sword of Mana is a special weapon that appears from time to time when a hero needs it to save the world.

Mana stones are a physical manifestation of Mana which give their element a greater influence in the surrounding area, and likely possess great power.

Mana seeds are the sisters of the Mana stones. They are seeds from the Mana Tree, possessing an ability to amplify their element's power, similar to that of the stones. The seeds also have a seal on them to bind the Sword of Mana.

Some lifeforms are inherently magical, like Faeries and Espers. Others were created from Mana itself, like the God-Beasts.

Intelligent beings can control Mana with focused willpower. This is easier for some than for others, but for the most part it is possible for members of any race to use some form of magic.

Materia is the 'fossilized' remains of creatures of Mana. It can be invoked somehow to release magical energy.

Chrysm is Materia formed from dead Dragons, and often the purest source of Chrysm comes from the eggs of dragons that never hatch. This, of course, is harder to come by.

Magirock is natural rock crystal, often a mineral as plain as quartz, that can be harnessed for Mana potential. Much like a piezoelectric crystal can convert mechanical energy to electricity, Magirock can be consumed for various magical purposes.