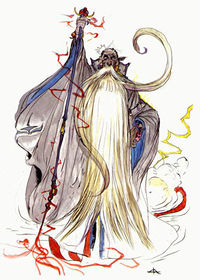 An Esper is a magical being whose physical body is comprised of Mana, regardless of the source of that mana. They are infused with Mana and would die without it; their very nature depends on its existence. Fortunately, Mana nearly completely permeates the Cleft of Dimensions so, while uncommon, they can live just about anywhere.

Sometimes when they die, Espers of great power transform into Magicite, which has various interesting properties that I won't go into here but notably contains some of the memories and personality of the Esper it used to be.

Since the entrance of Mana into the Cleft, Espers have occasionally sprung forth from Mana itself or other Espers in an abstract sort of way.

Some Espers, known as Guardian Forces, have been bound into magical contracts or otherwise imprisoned and must be summoned somehow in order to appear in the world again.

Esper blood has thinned down through the ages such that most appear humanoid these days, rather than the fantastic beasts of yore, although some of those are still around. Espers who aren't humanoid are known as Eidolons.

Espers start with the Ferre Potest spell, which adds the Featherweight flag to a weapon for 75 + (level x 1.5) minutes. It has a mana cost of 12 and a lag time of 18.