From The Cleft of Dimensions Wiki
(Redirected from Matango)
Jump to: navigation, search 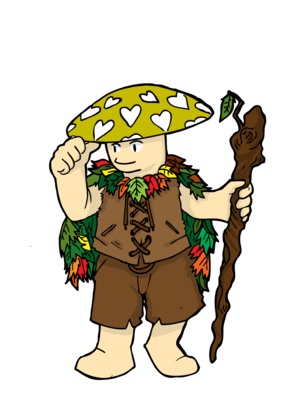 The Matangui are a race of mushroom-people, and many are actually native to the Cleft.

These ones originated in Shadmire when the Mana Tree was there, in the very early days of the Cleft.

One group of matangui have an established Kingdom, ruled by King Truffle? For some reason their princess is a human. Their land borders the Koopa Kingdom, whom they are constantly butting heads with.

Matangui come with an inherent resistance to water-type attacks. They have the Regeneration flag always on, which doubles HP recovery. They also thirst twice as fast as other races, and are Small sized (versus the Medium size of most characters).

At level 10, Mantangui get the Spore skill, which has a lag time of 18 beats and attempts to Poison the target. Its base chance of success is only about skill%/2 and it can also be resisted as Poison. Whether it works or not, it is considered an aggressive act.

If the target is successfully poisoned, then the target does not get an additional save chance to avoid the additional Blind and Confuse affects.