Relics of the Immortals

Ageatii is believed to have expelled this through his mouth upon encountering a Kildhu, worn and dying of thirst in the vast desert wasteland once known as Iktoa. It has the power to generate an infinite supply of freshwater, though only through direct contact with the body. It has provided moderate support for the persistence of a worn down city of Giganto and has elevated Kildhu's status into eventually becoming leader of the Giganto in the year ____. It has caused some controversy and rivalry with the Gerudo clan, which persists in the deeper regions of Iktoa desert (Haunted Wasteland).

The Four Instruments of the Venti

Created by the goddess Arctic, the four instruments of the Venti are tools of power that can channel their respective wind’s influence. Their existence is unknown but her most devout followers are said to be in possession of them. Upon the notes they make is the power of the winds and seasons. It is said that Avenant helped Arctic in create them but it was Arctic, in the end, who imbued them with her influence.

The chimes of Aquilon, able to be carried by a single person, are crafted with divine skill. From their sounds they can beckon the northern wind – strong, ill-tempered and bringer of winter.

The bells of Auster, strung from a cord of velvet, can call forth the southern wind – hot, dry and the bringer of summer.

Carved from ancient wood the panpipe of Vulturnus – with its melodies – can call upon the eastern wind – warm, rainy and the bringer of autumn.

Shaped from stone of ages past, the ocarina of Favonius can incite the western wind, the bringer of spring, to call upon its calm and pleasant nature.

This conductor’s wand’s origins are unknown but the powers it can produce are far from mystery. Powered by unknown sources, the Wind Waker can control the winds of the Southeast, Southwest, Northeast and Northwest. Under the conductor’s will, these winds can be orchestrated to produce feats both simple and marvelous. Its whereabouts are unknown but rumors do persist of its existence. It is also said that when used to orchestra the sounds of the Four Instruments of the Venti, the world’s weather can be changed by will alone as if the goddess Arctic was doing such herself.

After she destroyed the city of Brigantes and created the Madra Ice Field, Arctic herself enchanted this statue to watch over the entrance forever. The clever witch Deneb, however, created some kind of key...

A simple acoustic device, the megaphone is a funnel crafted of divine materials. If placed to the speaker’s lips as they speak, the speaker’s voice is to said to be heard all around the world by everyone. Its current possession is unknown but rumors circulate that it is carried by the herald of Avenant who used it once to declare the Great Wars of ____

Sheet Music of the Master Composer

Blessed by Avenant, these blank sheets used for musical notation, re said to exist somewhere in the Cleft. It is said to randomly fill up with musical notes that create a random score each time. But such inspiration is fleeting and once played the melody is gone and useless once more. Each melody is said to be divinely gifted to influence one thing or another.

The known melodies written upon the sheet:

The Urn of Dragon Tears

An urn that temporarily houses the remains of deceased dragons of Lelanol. Their blood is ritualistically consumed, and the rest burned at the top of the mountain, allowing the remaining "essense" of the dragon to ascend into the stars. 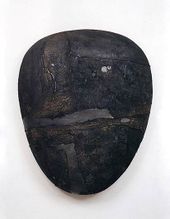 The Heart of Darkness

The Heart of Darkness

A black stone, roughly the size of a human heart.

The lore about this particular object is obscure at best. Some say that is is black materia, giving the holder the ability to summon something so hideous and powerful that the stone had to be sealed away lest someone destroy the entire world with it. Others claim that it is the heart of the Lord of the Night himself, plucked from his own chest and cast aside to remove all compassion and love from his thoughts.

And there are those that claim that talk of such things is nothing but myth, the result of drunken men trying to best each other with stories around the tavern fire.

Whatever this relic does, if it even exists, is a mystery. And if anyone actually knows more of this relic, they certainly keep their secrets well.

The Declaration of War and Peace

A single roll of parchment, which endlessly unrolls to the length it is needed to be, constitutes the Declaration of War and Peace. Said to be made from the flesh of Pisces himself, the Declaration creates a binding contract upon those who sign it. All wars start and end from it, just as peace is created and destroyed by it. It cannot be destroyed and once signed the contract cannot be broken – except by another Declaration. It is said to appear only when it is needed and no war may start or end without being recorded upon it, just as no age of peace may start or end without the Declaration’s interference.

The Pool of Stars AKA Sceiron's Mirror

The Looking Glass AKA Zebu's Mirror

These are magical cards comprising the original 21 cards used in the Ogre Battle as well as a mishmash of other magical cards. Not all of the effects are known, nor are they predictable from use to use.