From The Cleft of Dimensions Wiki
(Redirected from Reploid)
Jump to: navigation, search 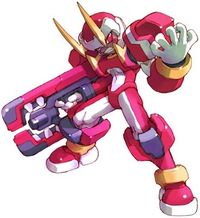 Reploids are a race of machine-people which generally look, act, and think like humans. They're warm to the touch, breathe, move around, and even bleed when you cut 'em, but strictly speaking they aren't alive.

A Reploid's primary energy source is a fuel cell built into their bodies. This fuel cell can run indefinitely, but its membrane must be kept hydrated to operate at full efficiency.

Reploids are not born, but are made in a complicated process, so their reproduction rates are relatively low. Most Reploids do not even know how to make another Reploid.

Most Reploids are descended from MegaMan X, arguably the first robot with free will. He was used as a design template to create more free-willed robots, which were called Reploids.

A large contingent of Reploids in the Cleft once constructed a space station named Final Weapon and took to the skies.

Sometimes Reploids 'go maverick' which basically means they flip out and kill people. This may be due to a computer virus infecting their systems, or they may just be conventionally insane (which happens with disturbing regularity). Chances are good that Reploids are inherently a bit unstable.

Reploids have an inherent weakness against electrical attacks, but are resistant to mental abilities. They are also immune to damage from poison affects.

Reploids cannot eat, but they also do not hunger. This means that they don't have to worry about eating, but also can't get the benefit of edible recovery items (like Fairy Walnuts or Fruits of Power). Potions and drinkable goods are still fair game, however. Berserking Reploid Gladiators become thirsty instead of hungry.

Because the actual armcannon object is recreated each time it's equipped, there's no way to change these damage types for an individual Reploid.