From The Cleft of Dimensions Wiki
(Redirected from Pumpkinhead)
Jump to: navigation, search 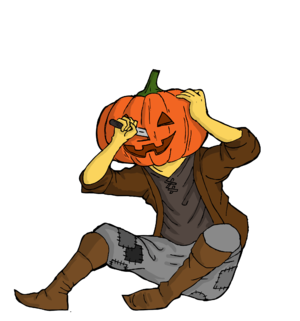 Pumpkinheads were one of the creations of the witch Deneb. They have traditionally been regarded as monsters and non-living due to their frightening appearance, spooky origins, and strange abilities.

Normal children are transformed into Pumpkinheads by placing a glass pumpkin over their heads. Only human children survive the procedure and even that is a toss-up. Pumpkinheads are also probably capable of making more pumpkinheaded children without glass pumpkins.

They are resistant to the Holy and Negative attack types, but vulnerable to Fire and Poison. They can also have the Dark_Vision flag always on, letting them see in any sort of darkness without a light source.

Also, for what it's worth, they don't have brains, ears, or eyes (at least not in the conventional anatomical sense).

Pumpkinheads gain the Pumpkin skill at level 25, which has a lag time of 24 beats.

A high Constitution stat will increase the chance of it working, and it cannot be resisted, but targets with more than four times the user's maximum HP won't be affected at all. It also can't be used repeatedly on the same target.

Using the Pumpkin skill cuts the user's HP by 1/5 to lower the maximum HP of their target by 1/3.