From The Cleft of Dimensions Wiki
(Redirected from Race)
Jump to: navigation, search 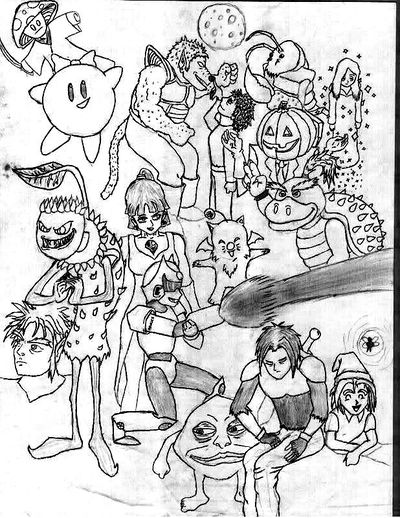 Playable races of the Cleft -- art by Demeter

The Cleft has a variety of humanoids with fish-like features.

The Cleft has a variety of humanoids with birdlike wings or other avian features.

The Beastmen mostly hail from the Beast Kingdom. They appear mostly human with some vague animal traits. When night falls, many are capable of transforming into a figure with mostly animalistic traits while still remaining humanoid. Like Saiyans, this transformation will strengthen them. They have evolved to be able to transform during any night, consequently in this state they are not as strong as a Saiyan in Oozaru mode.

Many Beastmen were raised to loathe most humans and the more humanoid races such as Hylians. Pokemon Trainers of any race are at the top of their hate list.

The chobin are a race of humanoid rats standing at an average adult height of four and a half feet. Many/all groups of chobins wrap themselves in very thick hooded form-fitting robes, which cover most of their body but leave holes for their tail and ears.

The scourge of merchants everywhere, this group of ratmen tend to live on the outskirts of society, shunned due their insatiable apetite for shinies. They originated in Luon, where they survived by raiding merchant caravans. When the Koopa Cavalry retaliated, the Chobins factioned off into different groups, identified now by the color of their hoods. Each group has grown to distrust the other and would probably steal from each other.

Deku Scrubs, also known simply as Dekus, are a tribe of small forest creatures that spit Deku Nuts at their enemies when threatened. They are plant-based creatures that have skin seemingly made of wood and hair and "clothing" made of leaves and flowers. They tent to sleep in a small flower-like tuft of foliage which they hide within when threatened. Despite their antagonistic nature they tend to be friendly, at least when they believe it to be in their own benefit.

Of odd design, the Dudbear almost appears to be an unreal creature, only fabricated by a puppeteer, as its skin appears to be made of the same cloth substance as its green-hooded work outfit. Added to this are various stitches which run along the entire body of the Dudbear, which give it more qualities of a poorly manufactured stuffed animal. It even has a pair of eyes which consist simply of large round dark shiny stones. Regardless, the Dudbear is very much a real creature of flesh and blood. Its origins remain unknown.

Dudbears have a difficult time learning other languages.

Fairies are flying spirits of magic, often resembling little nimble females with wings. They tend to be easily frightened and avoid contact with anyone, choosing often to utilize invisibility magic or camouflage. Often times, there will be a much larger, Great Fairy in close proximity to large numbers of fairies. These Great Fairies tend to speak more openly with strangers, often because they have access to large cache of spells and enchantments to protect themselves and their colonies from danger.

The tiniest fairies are often caught and traded illegally in bottles, as sprinkling their dust on a person can heal them or temporarily imbue them with other special powers.

Some of the more curious and sociable fairies opt to become companions with the Kokiri.

People of the desert. It is said that the entire race is female, except for the one destined to rule the Gerudo, born each thousand years. It's also likely this tale was started by Gannondorf and males are rare and routinely killed. They settled in Iktoa before it became the Haunted Wastelands. During this time, Gannondorf left with a squadron of his best men to seek a way to save his people. He has not been seen in quite some time. Nabooru has taken over leadership of the Gerudo, with Aveil second in command.

The Gerudo used to live in the city of Iktoa, which is now a ruin. They now reside in a hideout in the middle of the Haunted Wasteland. Several Gerudo also left for Hyrule or other nations that would take them in, though if Gannondorf and his loyal followers have executed Gerudo caught abandoning their homeland.

They are in constant conflict with the Giganto in Gigan Hold, whom they view as traitors.

Short and stocky, goblins are close cousins to imps, usually being closer in size to the shorter humanoids like Matangui. Like imps, they come in a variety of types. Unlike imps, they are not openly mischievous, but rather serious. Still, goblins tend to be territorial and aggressive, usually claiming large swaths of wilderness as their own and willing to fight to the death over any minor dispute.

A rare, but highly social race, the Goron is a large rock-like man who survives by eating rocks. They are able to taste the different flavors of rock and can probably tell you where one came from, or its innate value, which makes it more delicious.

While many Gorons were transplanted to the Cleft of Dimensions, the vast majority did not survive the harsh conditions of the first years in the Cleft.

Ugly, populous humanoid imps thrive in many parts of the world, and come in many colors and types. They tend to have bad taste in fashion. Mystics are another name given to many imps from their dimension of origin. Nearly all groups of imps tend to choose their leaders based on brute strength, or sometimes for just being larger.

Gremlins - Skinny and hunchbacked, they are hidden in the darkest corners of the earth. They tend to be much larger than imps and have very long arms.

Possibly not a real race: no one will ever know because these folks, commonly referred to as Shy Guys, always are completely concealed in single-color cloth robes and a white expressionless mask. They are known to be quite immature, and the Kamenbito also avoid speaking to anyone that isn't Kamenbito. They come in a variety of flavors and like to accessorize.

Large hairy apes that have the ability to walk upright (in varying degrees). They are able to speak, and most have the last name Kong, though it is unknown if they are actually all related. Kongs have an insatiable love of bananas.

Krokodile humanoids with partikularly nasty personalities. Disliked nearly universally, for the most part they tend to roam the outskirts of sivilization. Many Kremlings have taken to bekoming pirates, either at sea or in some kases, outer spase. They tend to speak with thikk aksents.

These guys are just strange. Friendly, but strange.

Humanoid sharks are occasionally spotted by civilians. They usually appear dressed as pirates, though there isn't much of a record of them pillaging ships. Supposedly they have an underwater vessel somewhere.

Very similar to Fairies, except many Sprites cannot fly and are magically attuned specifically with nature and the seasons. Also unlike Fairies, many sprites cannot use magic directly, but are capable instead of allowing objects or small areas to become enchanted.

These hardy folks have dwarf-like stature, but with a walrus head and tusks, obviously. Their fat reserves and natural toughness have allowed them to easily adapt to the coldest environments, and have chosen the northern frosty forest as their home. While they avoid technology, the walrusmen do not openly dislike it, but they spend most of their past time in the wilderness, either hiking, boating or fishing.

Super rare and shy singing and dancing flowers. They are among the most rare creatures of the Cleft, and their petals are coveted. Dayzees have adapted to the Cleft to be brutal combatants, but really wish to be left alone and will run away when given the chance. All species have mastered Teleportation magic.

No specific racial characteristics. Pokemon came from a dimension where one race had enslaved the others and forced them to battle each other for viewing pleasure. This tradition has weakened the Pokemon in question to universally be vulnerable to Tame.

The Slimes are a common and adaptable group of creatures, capable of living in literally any habitat, and ranging in size from the gigantic Lime Slime down to tiny slimes as big as a raindrop.

The common feature between all slimes is the lack of internal structure. Most of them have no organs of any kind. Generally they can, if divided, survive and grow back to full size. Given a proper environment, there seems to be no limit to how small a piece can live. The tiniest piece is capable of acting as a brain, stomach, muscle, or anything else, all at the same time!

Some slimes are known to evolve quickly, adapting to the ever changing environment of the Cleft. Some slimes have evolved to the point of becoming intelligent speaking creatures. There is an encyclopedia in the Viorar Library that focuses on slimes.

The violent and unpredictable nature of the Cleft has led to the death of many creatures. While most souls descend into the Underworld on death, some don't always make it.