From The Cleft of Dimensions Wiki
(Redirected from Koopa)
Jump to: navigation, search 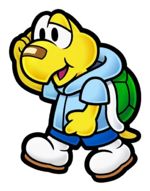 His hoodie is on under the top of his shell but you can't see his plastron so how does this work ???

Koopas are one of the more populous intelligent races of the Cleft and they have adapted, often by evolution, to just about every region in the Cleft.

The Koopa Kingdom exists around the northern edge of Shadmire, and is ruled by (you guessed it) King Bowser. Bowser holds just about all the power in the Koopa Kingdom, though he has several subordinates that go about the actual business of running a nation.

The Koopa Kingdom invaded Guardia at one point, to try to capture Princess Toadstool while she was on vacation, but were forced to retreat by the Truce Militia.

The default color of a Koopa character's shell depends on their innate.

Koopa shell colors are purely cosmetic and don't have any additional gameplay effect. Should a player wish to have a different shell appearance, a restringed shell will retain its name across logouts etc.

All Koopas resist Fire, but are vulnerable to Water.

Koopas have a shell permanently equipped in their About slot which gives them extra armor. The color of the shell depends on the innate of the character. The armor provided by the shell increases every five levels to [new level x 1.05].